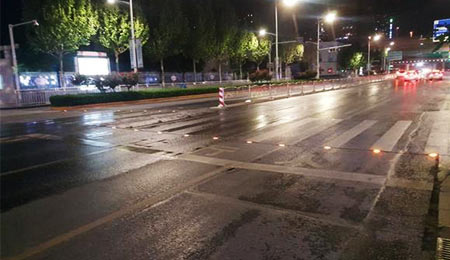 On April 23, a reporter from Dahe Network learned from the Zhengzhou Traffic Police Detachment that where there are no conditions to install signal lights and where were densely located in government agencies, primary and secondary schools, hospitals, parks, markets and residential communities along the route. A smart intersection system with solar stud lights was installed.

"When the system detects pedestrians and non-motor vehicles crossing the road, the video detection will pass the signal to the flashing solar road stud lights through the control system, forming a red warning light strip to remind the vehicle to actively give courtesy to pedestrians." For vehicles that have not avoided pedestrians passing through the zebra crossing, the induction system will activate the aerial video probe for video recording and forensics, and punish illegal vehicles based on the evidence.